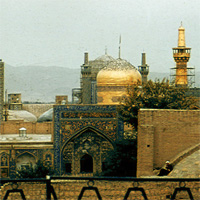 The Religious Studies Concentration at The College of New Jersey aims to familiarize students with the beliefs and institutions of major world religions, their origins and evolution in different regions of the globe and in different historical periods, their intersection with textual and non-textual forms of expression, and their profound impact on human culture and society in the past and in the present.

Through courses in World Religions, students develop understandings of belief systems and institutions of individual world religions and acquire skills in comparative analysis. Courses in Religious Culture increase students’ awareness of diverse cultural frameworks, particularly as they are expressed in literary, artistic, architectural, and other forms through which religious belief has been expressed in different historical periods and regions. Through courses in Critical Issues of Religion, students gain mastery of the basic theoretical construction of religious belief and its ethical and epistemological ramifications. Courses in Social Science and History acquaint students with the historical development of religious belief and institutions; with how, over time, beliefs and institutions have interacted in both peaceful and violent ways; and with how beliefs and institutions continue to influence, and be influenced by, contemporary social and political ideologies and institutions.

Through courses in all these areas, students gain skills from analysis, criticism, and research that enhance their ability to think clearly, write well, and find, analyze, evaluate, and present facts and ideas effectively. Students pursuing a Concentration in Religious Studies learn to analyze primary documents and non-textual sources (art, music, architecture, etc.) with a critical appreciation of their history, meaning, and significance to understanding historical and contemporary religious phenomena.